All the reasons
you need to
crush your debt 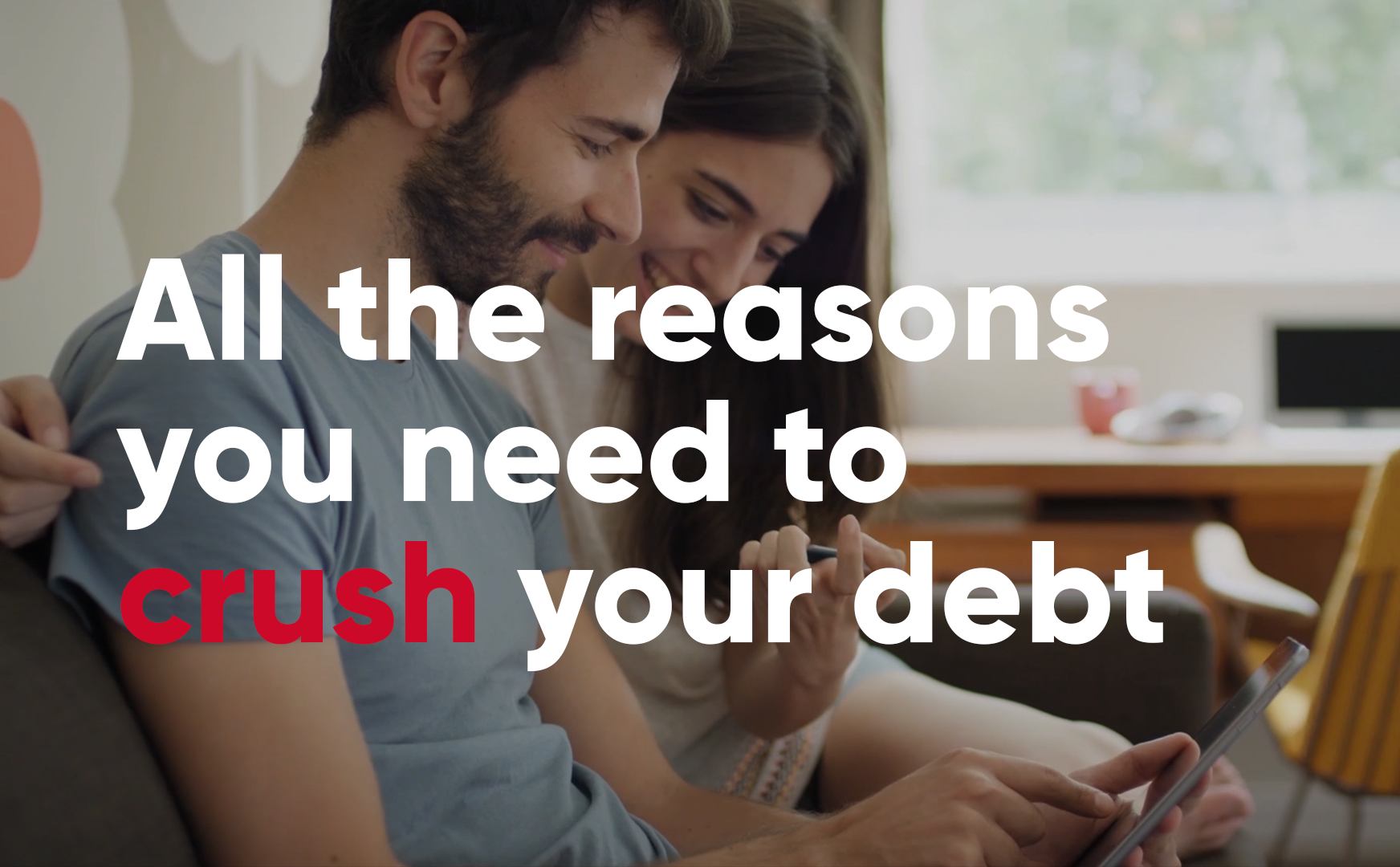 Do you remember when you first tried it?

It was just a little bit, every now and then… But pretty soon it evolved into a serious habit.

settings
The temptation of debt can be as addictive as a drug. But if your monthly bills are causing you stress and you have more money going out in loan and credit repayments than you have coming in, it’s time to quit your dangerous habit.

The Great Aussie Credit Crush Research Report we commissioned to explore why debt issues are ruining too many people’s lives, revealed that a staggering 40% of Australians report they experience stress directly related to credit debt.

It’s a worrying figure that reflects the nearly 9 million Australians who admit that their debt issues are a result of their own credit mismanagement.

The same study shows that Australians are in credit debt to the tune of $50 billion.

Credit cards are the greatest source of debt amongst the listed products, with a combined credit card debt of $27.6 billion nationwide.

They are shocking statistics that we are determined to change.

The Great Aussie Credit Crush teaches you that living within your means is more important than living a life of debt drama.

Goal-oriented spending, strategic savings and the grown-up approach to take control of your life - and your money - is what you need to live a better life.

Your debt hasn’t been doing you any favours so far.

Creating a better version of tomorrow needs to start today.

This isn’t about feeling guilty for the dumb debt-related decisions you’ve made in your past.

It’s time to let all that go and face the future.

settings
If you’re a parent, there’s even more reason to change your behaviour.
settings

Today’s children rarely see real cash transactions and by watching you wave your card to pay bills, treats and the everyday essentials, the idea of how much actual money is behind each and every spending session, is difficult to comprehend.

Don’t let them make the same mistakes that have led to your debt issues.

Lead by example and show them money is something to respect - and manage.

When you spend real money, rather than borrowed credit you pay back at inflated interest rates, the line between what you want and what you need becomes clear.

settings
Getting rid of debt will make things get easier.
settings

Or, you can ignore common sense and keep paying all those inflated interest repayments to the banks.

At the end of the day, it’s your choice.

All we’re asking is that you think carefully.

Because, honestly, there is a better way to live.

Why should you crush your credit? Really?

settings
Be part of a community that cares and crush your credit.
settings

It’s possible. And it will change the way you live.

By understanding the tactics banks use to get you on the debt repayment treadmill, you can learn how to run your own race - towards a debt-free future.

GENERAL ADVICE DISCLAIMER: Play it smart! The information contained on this web site is general in nature and does not take into account your personal situation. You should consider whether the information is appropriate to your needs, and where appropriate, seek professional advice from a financial adviser.

settings
We’re a financial advice firm – but we’re not just about improving your finances. We help you build the life you want, by prioritising what’s most important at each stage of your life and putting together a financial roadmap that will make it happen.
[bot_catcher]